The boundaries between my personal and professional lives are completely blurred at the moment. My head and my heart are bursting. My days are filled with experiences, thoughts and emotions that touch closely on the things I have spent the past decade researching. This week I’ve learned more about people with learning disabilities dying, and what makes it hard for everyone, than I’ve learned in the past few years of research. The stories in my head need telling, but they are not the stories of anonymous research participants that I can write articles about. These are the stories of my friends. These are my stories.

The best place to tell my stories is this blog. I can’t focus on my work without telling you what is happening at home. So be prepared, everyone, for a series of blog posts about Carol and Michelle dying.

First up is Michelle’s friend Colette.

(That’s not her real name. I didn’t know Colette until two days ago, so let’s give her some privacy.)

When I heard that Michelle had died and I turned up at her care home, I was flabbergasted to find that the staff had not told Michelle’s 20 or so fellow residents about her death. Indeed, they had no intention of doing so until after her body was secreted away. They’d tell them tomorrow, perhaps.

It was 11 o’clock in the morning. Michelle had died around 3am, and since that time she had been locked away in her bedroom, with staff quietly informed as they arrived on shift. The sound I could hear was the overwhelming sound of silence.

“But, but, but…” I spluttered to the person in charge (let’s call her Mandy), “if people don’t know that she’s died, then they can’t say their goodbyes. Wouldn’t some people like to see Michelle?”

“Oh no, we don’t do that, they couldn’t cope with that,” Mandy said as quickly as she could.

Well, I wondered aloud, what’s wrong with that?

I couldn’t let it go. I was still reeling from Carol’s death two days earlier, and had spent time helping everyone in the L’Arche community cope with it. Some 50 people (with and without learning disabilities) had gathered at Carol’s home in the evening. We shared memories. I told everyone exactly what had happened in the hospital, and why Carol had died, and how sudden it was, and how sad I felt, like everyone else. Some people (both assistants and people with learning disabilities) sobbed. Others were subdued. Some could not understand the words but were sitting with us nevertheless.

Not telling people about the death of a housemate?

It wouldn’t occur to me. Because if you don’t tell people, how can you begin to cope with it? I wasn’t just helping other people cope with it: through talking to everyone about Carol, and about what happened, I was also helping myself.

I tried not to show how horrified I was. I told Mandy that as luck would have it, it’s my job to help homes like hers cope with death. Yes, I completely understand how difficult it all is, but in my experience it really would be best to tell everyone straight away, and to give them an opportunity to see Michelle.

Hm. The person Mandy was most worried about was Colette. She and Michelle were close friends, always sitting together, looking out for each other. Perhaps they’d tell her tomorrow, separately. “I really don’t know how she’ll take it,” said Mandy. “I think she’ll fall apart.”

“Well,” I said, “if there’s anything I can do to help… I’m happy to talk to anyone about Michelle dying.”

To their credit, they listened. They told the group of residents at lunchtime. Then one of the staff members came into Michelle’s room (by now, her door had been unlocked, thank goodness, and I was sitting around chatting with the long-term friends I had called in, who were going to help wash and dress her). Could I come? Colette had taken it very badly. Could I please talk to her?

I met Colette in the quiet room she’d been taken into, together with a staff member (let’s call her Gloria). I could see immediately why Michelle liked her. Both were black older women with Down Syndrome; both were very self-possessed. I’d seen Colette before, when I visited Michelle, but I’d never had a conversation with her.

“Hello Colette,” I said, “are you Michelle’s friend?”

“So am I,” I said, shaking her hand. “How lovely to meet you. Have you heard about Michelle?” She nodded, so I asked, “what have you heard?”

“Yes,” I said. “She has. That’s what I heard too. I am really shocked. And I am feeling very sad. Because Michelle was my good friend and I’ll miss her.”

Colette looked at me. “I want to pray for Michelle,” she said.

“That is a really lovely thing to do,” I agreed. “You could pray for her now, if you like.”

Colette almost sent me into floods of tears, because she folded her hands and said the most beautiful, articulate and personal prayer. “Dear Lord, look after Michelle…”

When she finished, Gloria said to Colette, “Michelle is happy now. She’s looking down on us.”

“Yes, I think that’s true,” I said. “Michelle is not in pain and I think she is happy. But I am not happy. Because now Michelle is not here anymore and I don’t like it.”

Colette looked at me now, nodding and nodding, so I asked her, “What did you and Michelle do together?”

Then Colette talked and talked some more, about how she and Michelle used to sit together and do their drawing together. I can picture the two of them. I was so very grateful that Michelle had such a friend, and I told Colette this.

“Did you already live here when Michelle first came? Yes? I am soooo glad that you were her good friend. Because I was worried when Michelle had to leave her old friends behind. I was worried that she wouldn’t find any new friends. So I’m glad she found you. Thank you for being such a good friend to her. But now it’s hard for you, isn’t it. Because now Michelle is dead. And now you have to sit and do your drawing by yourself, without Michelle next to you. You will miss Michelle.”

By now, we were just having an ordinary conversation, almost as friends, both remembering Michelle. Colette started to mention other people in her life who had died, and I joined in.

“Yes, my mum died four years ago,” I said. “Now that Michelle has died, I am thinking of my mum. Don’t you find that too?” I asked Gloria, turning to her. “That today you think of other people who died?”

Suddenly she was Gloria, rather than The Support Worker. “Yes…” she said, “my mum died too. I’m thinking of her too.”

It was rather lovely, the three of us having this intimate moment of talking about the people who were close to us. And for Colette, it was enough. She put her hand on my knee and looked me straight in the eyes.

I was impressed. “Goodness,” I said. “That’s amazing, that you’re alright now. I’m not yet alright…” And I had a sudden thought: “I think there is something you might like to do for Michelle. You like drawing and she liked drawing. Perhaps you could draw a picture of her? Or a picture for her?”

“Oh yes, oh yes!” Colette said. “I’ll do that. I’m going to do that now.” We gave each other a big hug and off she went, wheeling herself away in her chair. We had spent less than 10 minutes together – that was all she needed.

Gloria was amazed at how straightforward this had been. And agreed completely that it was good to be so open and honest. For me, it is the only way. I cannot imagine not talking about dying. How exhausting and difficult would that be, to worry about what to say, and to avoid it? It seems to me that the easiest, by far, is simply to name the things that have happened; the feelings we have about it all; and the things that are going to happen next.

Now, the next thing was to persuade them to let Colette see Michelle before she was whisked away by the undertakers.

I do take my hat off to the staff at that home, because they were clearly frightened of death, and it is not easy to change that around. By the time we had made sure Michelle looked beautiful and peaceful, and we had tidied her room, the staff had come to the conclusion that yes, perhaps Colette should see Michelle. They called in Colette’s mother, who had also become close to Michelle – she’d even visited Michelle when she was in hospital.

When Colette came finally came to Michelle’s bedside, it was gentle and it was important.

“Bye bye Michelle,” she said. I asked her whether she might like to say another prayer, and she did. She was serious and composed. Her mother, in the meantime, frantically stroked Colette’s head: “Don’t cry, don’t be upset…” (She looked more upset that Colette.)

For now, it was mission accomplished. I told Colette and Gloria that there would be a gathering of friends in Michelle’s old home that very evening, to remember her and talk about her – perhaps they would like to come? I could see Gloria was rather taken with this idea, but it was probably a step too far.

“Thank you,” I said to Mandy later that day, “for letting us stay with Michelle, and for letting Colette see her.”

Mandy agreed that it had been good. “We just needed to wait for her mum, because she needed her mum to support her.” 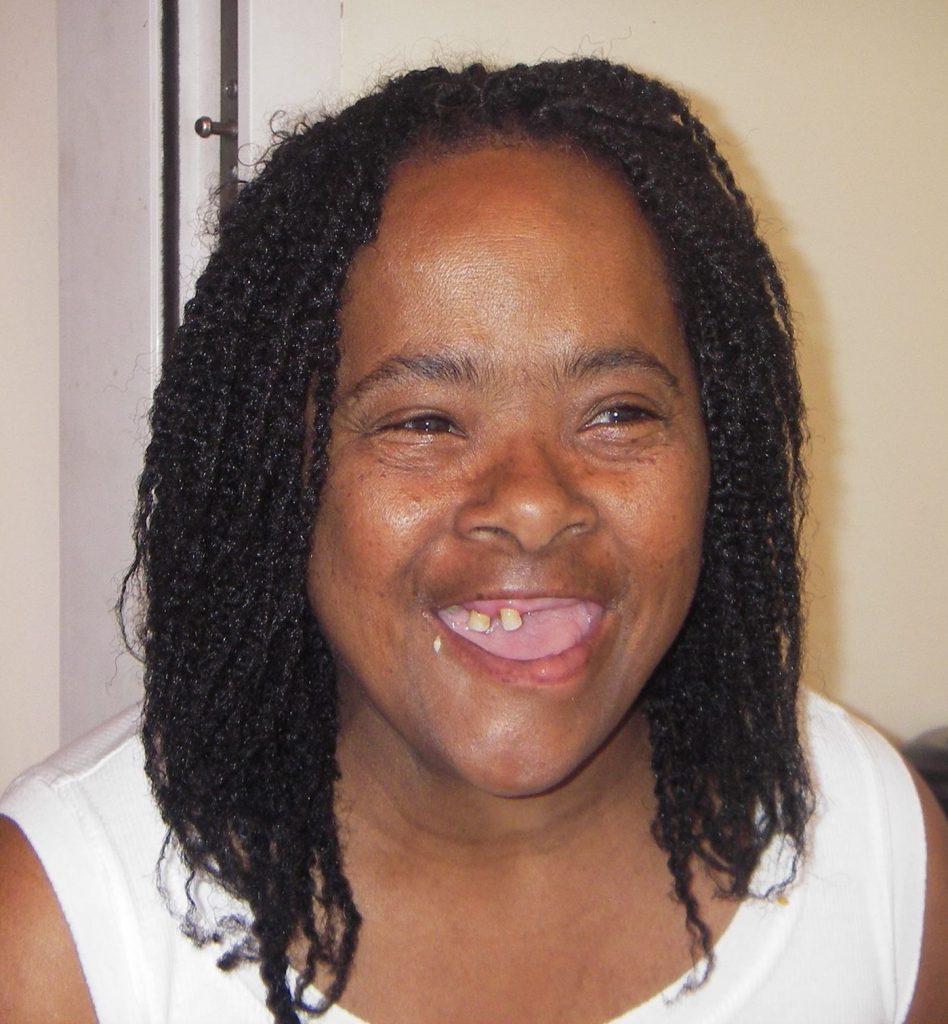 Michelle in her younger years

5 thoughts on “Telling the stories of Michelle and Carol dying”